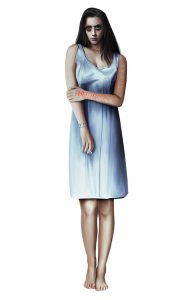 The Broken has gazed into the Abyss and escaped with their mind in tatters. They could be a homeless
person who subconsciously performs rituals to forgotten gods, the mental patient who became a test
subject for experimental medications, or the sinner who was physically dragged down into hell, yet
somehow managed to escape back to the land of the living. The Broken views things and sees through
the Illusion in ways others do not. In exchange for their irreparable trauma, they’ve been granted unique
insights about the Truth. The question is, how far can they trust their own senses?

Everyone introduces their character by name, looks, and
personality. Take your turn. Write down the other player
characters’ names. Go around the table again to establish
your Relations.
If you know any of the other player characters from before, choose one of these options to establish the relationship between the two of you.

Decide the nature of three additional Relations: One neutral (0), one meaningful (+1), and one vital (+2).